Bernunzio Uptown Music is reopening its storefront after nearly three years. [...]
Mon, Jan 30, 2023
City Newspaper Art Blog
In Our New Year
by Alan Singer
Alan Singer, creative artist and writerJanuary, 2023Here we are in 2023! To start it off I am working on a new small painting I intend to give to my wife Anna, for her birthday. This little abstract is like a crystal growing in my studio. The facets are cut like a jewel, very geometric..and the image has implied movement. It is like a dance, but we will get to that later. Anna is in the next room playing her piano and working her way through a new score. Music is a big part of our lives but because of the pandemic we don't go out to hear the symphony like we used to! Anna, Michael, and Alan on Elmwood Avenue In the past we have entertained guests like Michael Kimmelman ( seen here in our old house [...]
Sun, Jan 22, 2023
The Visual Art Worker
Finding a Time Frame
by Alan Singer
Kevin Indovino measures at MuCCC142 Atlantic Avenue, Rochester, NYMy most recent showing of paintings!Looking over an unusual year I was grateful for the opportunity to exhibit new artwork at MuCCC here in Rochester and thankful for the assistance of Kevin Indovino who helped me mount the show. As our year of 2022 is now behind us we have to observe the artists who have passed on and here I am thinking of Sam Gilliam who was 88 years old and had a very creative life and I am grateful for having had the chance to meet him. In 2006 he was having a retrospective at The Corcoran Art Gallery in Washington D.C. and this gallery space in 2022 is now closed due to financial considerations.Sam Gilliam, painter, passed this year, he was 88 and had a successful careerSam. came to my classroom in 2006 to give critiques and later that day gave a talk at The Memorial Art Gallery. Sam's artwork was out of the ordinary, often they were paintings that draped over a space, not the typical stretched canvas in a frame. An art historian who championed Sam's work was Jonathan Binstock who has been the [...]
Sat, Dec 31, 2022
The Visual Art Worker
The Christmas Story
by Stephanie Krist 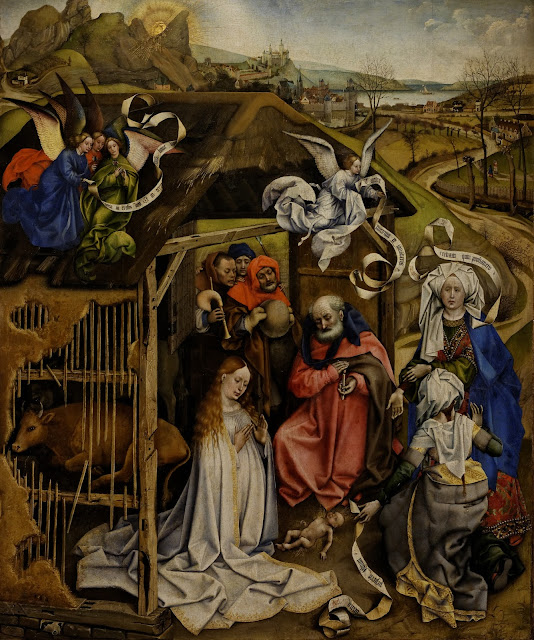 Merry Christmas Eve! Tonight, some of you will be going to a Christmas vigil mass and will probably hear a retelling of the birth of Jesus. It is a familiar story with some key elements - Jesus in a manger, shepherds in a field, and three kings bearing gifts to the newborn child. With these key points, the story is complete, but it was not always this way. The nativity story that we are familiar with today is actually a composite narrative of canonical and non-canonical writings. In the early years of Christianity, the Church leaders spread this hybrid tale to the masses through art, which Pope Gregory the Great described as “the Bible of the illiterate." The Dijion Nativity by Robert Campin is an example of several nativity stories melded into one. Campin pulled from the canonical gospel of Luke, the non-canonical gospels of Pseudo-James and Pseudo-Matthew, and the popular (at the time) vision of Saint Bridget of Sweden. Dijion Nativity, Robert Campin, c. 1420 Shepherds from Portinari Altarpiece, Hugo van der Goes, c. 1475 The three shepherds peering in at Jesus are from the canonical gospel of Luke. Each of the gospel writers played towards their audience. Luke wrote in Asia [...]
Thu, Dec 24, 2015
Boiled Bunnies
Essay Tips Part 4: Editing
by Stephanie Krist
If my calculations are correct, you probably got your midterm research paper back a couple weeks ago, and it was covered with red pen marks. With only four short weeks left before your final paper is due, you're wondering how you can improve your writing to boost your grade for this last assignment. Below, I have listed some of the most common mistakes you should look out for while editing your paper. This is a lengthy post, with no pictures, but I promise it will be helpful for you art history students out there. 1. Using “WH” words outside of a question Who, what, where, when, why, and how. In everyday conversation we say things like “that is where I bought my watch” or “this is how you tie a shoe.” However, in a formal paper, “wh” words should only be used when posing a question. So, if this was a formal paper, that last sentence would be a mistake. I could rephrase it as “…words should only be used if posing a question.” I don't bother making that edit here on the blog because I want to have a conversational tone, but I would never (knowingly) submit a paper with that [...]
Thu, Nov 05, 2015
Boiled Bunnies
Wheeling Community: Exploring Rochester’s Little Known Public Art by Kitty Jospé
by Guest

Wheeling Community: Exploring Rochester's Little Known Public Art by Kitty Jospé On Sunday, May 3, over 80 people joined Bleu Cease, Executive Director/Curator at RoCo and Photographer Richard Margolis for a tour of eight hidden treasures of public art. This tour, in conjunction with the current exhibit, “Ride It: Art and Bicycles in Rochester” at Rochester Contemporary Art Center (RoCo) celebrated the idea of “slow art” and a chance to notice not only what we often are hurrying by, but to think of larger implications of how we live in our environment. It is heart-warming to join with others on a sunny spring day, and discover art and the stories and contexts behind it—and this incredible dividend: No, not the sounds of trains, or the way sculptures frame fascinating details of buildings, but a sense of feeling connected to others, and connected to our city. Did you know Rochester has had Liberty Poles at the same site since 1830? What a surprise to arrive on site-specific six-part Rochester Project, by Richard Fleischner. It is a magnificent outdoor amphitheatre, looking out on three stone lattices, all the same size but with variations on [...]
Tue, May 05, 2015
First Friday Guest Blog
Carl Chiarenza
by Jonathan Everitt

“A photograph presents the artist and the viewer with a challenge, because we always want to know what it is—as if the photograph were not there. For over 165 years, an extraordinary number of forces have made us instinctively believe that photographs are windows on reality—even when reason tells us otherwise.” — Carl Chiarenza, 2013 lecture excerpt A photograph of you is not you. It is, in fact, an illusion. That simple viewpoint is perhaps the cornerstone of famed photographer Carl Chiarenza's body of work—and his role as a mentor to other artists. “It's not unreasonable for people who are interested in photography to accept what has been broadcast since the 1830s, which is that the photograph captures reality, actuality,” Carl says. "Mulligan Print," by Carl Chiarenza. Carl's work has been shown around the world and can be found in the collections of more than 50 museums, including The Getty Museum, Philadelphia Museum of Art, The Museum of Modern Art in New York City, The Art Institute of Chicago, and Bibliotheque Nationale in Paris. “From my point of view, it never did that. Every photograph is an abstraction.” That perspective has so informed his work, he avoids some of the [...]
Fri, Mar 07, 2014
Jonathan Everitt
Mikaela Davis
by Jonathan Everitt

Rochester musician and SUNY Potsdam student Mikaela Davis plays a semi-grand harp, one size down from a concert grand. When she first began to play as a child, she started on a smaller-style troubador harp. “I've always known I wanted to go to school for music,” she says. “I wanted to be a professional harpist in an orchestra and teach harp at a college—until my own music became my main focus.” (photo by Aaron Winters) Let's play word association. “Harpist.” Go. Did you respond with “pop-music newcomer”? You will. Rochester-born Mikaela Davis knows how to show a harp who's boss. Backed by a mix of guitar, keyboards, and her own lilting vocals, Mikaela has deftly plucked a classic instrument out of its past. Spun it into a modern sound. And wrapped it in sparkling lights, ready for download. Her self-titled debut album came out in 2012, and she describes it as indie-pop. Just the same, she's hesitant to commit to a category. “I don't like to put myself in a genre. The music we're doing now, it's nothing like my first album. We went something that's more psychedelic rock on the new EP,” Mikaela says. Brian Moore, audio engineer and owner of Red Booth [...]
Fri, Dec 27, 2013
Jonathan Everitt
The Beauty of Gray: Scapes exhibit showcases video art that's not all black and white
by Guest
The Beauty of Gray: Scapes exhibit showcases video art that's not all black and whiteby Geoff Graser If you don't “get it” right away, Debora and Jason Bernagozzi understand. When the couple tells people they do video art, most people say, “Oh, you do commercials.” Nope. “Oh, you do those weird foreign movies.” Not exactly. The Bernagozzis' art form is more like abstract art—abstract art that moves and talks and sometimes chirps. The Bernagozzis' work is part of RoCo's “Scapes” exhibit on display until Sunday, November 13. On my first try, I didn't exactly “get it.” And that's all right, Jason says, that's partly his point. He thinks Americans are spoon fed so many messages through the media and popular art that people believe what others want them to believe rather than making up their own minds. This echoes some of the work of Nam June Paik, considered the father of video art for his innovations in the 1960s. Paik would take footage of the Beatles and manipulate the waves so the Fab Four would disintegrate. He did this with politicians and other TV celebrities, hoping to convince viewers that the people on TV weren't indestructible gods. So you're not alone if you [...]
Thu, Nov 03, 2011
First Friday Guest Blog